Reserves for non-renewable energy source such as Oil, Natural Gas or Coal represents a much smaller portion of the technically recoverable resources. What they represent, that fraction of the total, not only is technically recoverable but is commercially recoverable. It generally makes sense on a prevailing or anticipated economic conditions in reference to the marketplace for selling the resource, what is supposed to be paid to get the quantity of Coal from the ground in terms of labour and capital costs etc.

So under prevailing economic assumptions, there is reasonable likelihood of being able to recover a certain amount, a certain fraction of the resource in place. And that is what we call reserves.

Region wise it can be seen that the decline in reserve is observed in Middle East & Africa, South & Central America, Europe & Eurasia 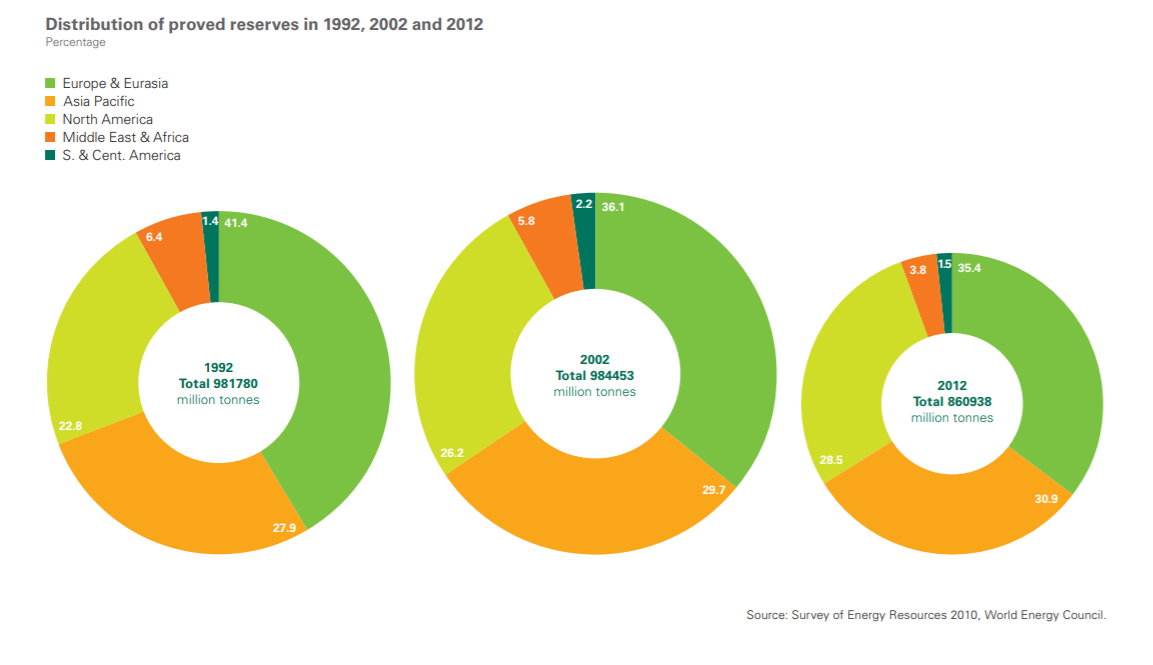 Calculating how much of a given region’s demonstrated coal resources should actually be considered “reserves” depends on a complex interaction between technology, economics, and environmental regulations. 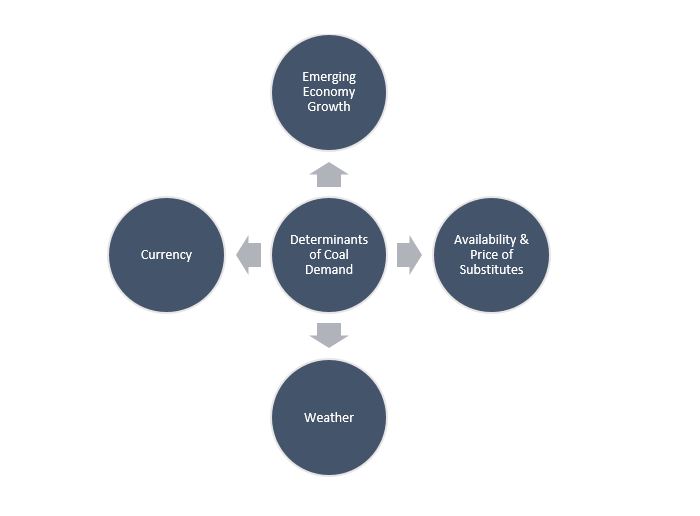 Determinants of Demand for Coal can be listed as

In case of Emerging Economies especially China and India, demand for energy has shown a rising trend.

Increasing global demand due to expansion in emerging economies has led to an increase in price of Coal in the energy market. Further the emerging economies are poised to continue the growth of demand for energy commodities in coming years.

The mix of fuels used to generate electricity has varied over time. Several factors, especially changes in relative fossil fuel prices, have influenced the mix of energy sources used.

The ‘elasticity of substitution’ concept measures how the use of these fuels varies as their relative prices change. As fuel costs and technology change over time, some energy sources become more economical to use than others. Although coal has been the predominant fuel used in power generation in the U.S. over the last 60 years, its share of the fossil fuel mix has varied in response to changes in the cost and availability of competing fuels. 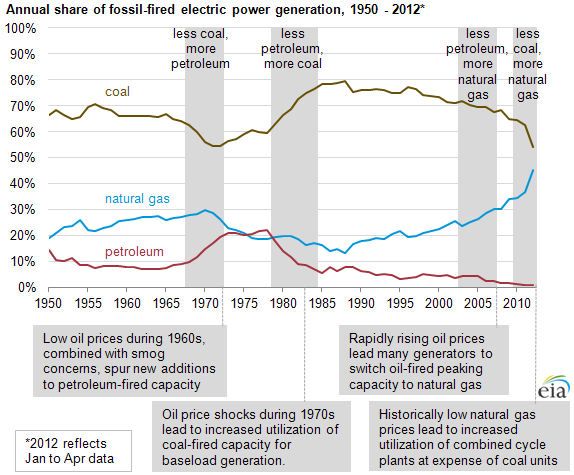 As an example we have taken the case of Power Generation in USA and analysed the share of Coal, Natural Gas and Petroleum in the process. Interesting point to observe is that post 2005 historically low natural gas prices has led to its increased utilisation at expense of coal units. This clearly means there has been a decrease in demand of coal in the period 2005 – 2012 with the requirement of fuel being compensated by Natural Gas as a reliable substitute.

Weather is another factor that is capable of affecting the price of coal. In this aspect, an increase in the volatility of the temperature often leads to a change in the demand coal. This effect is especially apparent during the winters. For instance, with the extremely cold winter that was witnessed around 2010-2015, the demand for heat went up along with the demand for electricity. And as long as coal remains the world’s number one source of power and heat, such weather condition is bound to move the price of coal.

The Australian dollar, or the AUD, is a good example in case of Coal. If, for instance, the value of the AUD rises, price of coal exported from Australia will rise this will in turn lead to decrease in demand for coal. 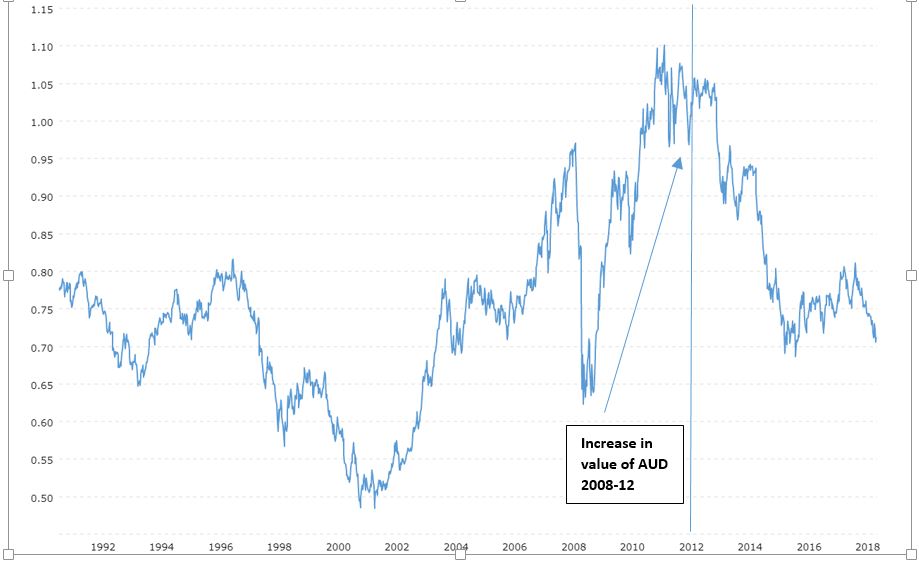 As it can be observed from the above figure, increase in value of Australian Dollar in the period of 2008-2012 could have made the coal exported from Australia more expensive impacting demand for coal and making it slightly lower.

Despite coal being a non-renewable resource, supply is not a problem for the now since global reserves are still very large. However, if, in future, more investment is made toward coal production, the industry might experience congestion – too much supply in simple terms. Too much supply, in the end, is bound to overweigh the demand for coal, which in turn brings down the price of the commodity. 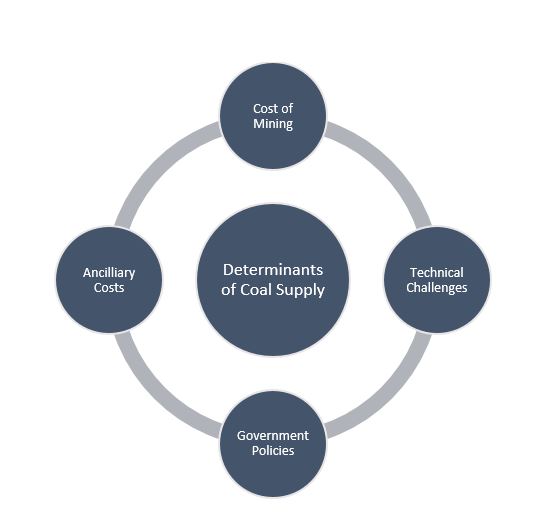 Factors affecting supply of Coal can be listed as

Cost of mining is dependent on various complex factors such as geology, extraction methodology, and percentage of deposit remaining. Depending on these factors production could be expensive or cheap.

In general it is being observed that Coal is getting more and more expensive to produce. Below figure depicts rise in average cost of production of coal for 2004 – 2011 period. 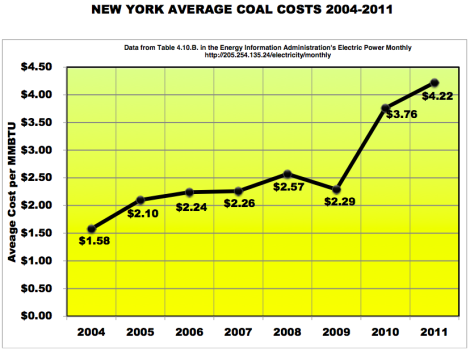 Reason for rise in price is that due to the continuous production, the easiest-to-reach coal has been mined, which means coal companies have to dig deeper and go after thinner seams and smaller deposits. That costs more, in both energy and money. Higher cost of production would mean decrease in supply of coal, in turn leading to increase in price.

Government policies and regulations especially with respect to environment can also impact supply of coal. With increasing focus on climate change and call for closure of coal fired plants and carbon taxation – supply challenges have been growing which can increase cost of supply and lower general demand

Decrease in proved reserve estimate suggests that a fraction of reserve which was considered to be economically and technologically viable for extraction, given the market condition is no longer viable.

Shift in market equilibrium could be because of the following factors

(2) Technological Advancement and efficiency improvement, and

(3) Environmental protection globally as being the main challenges

The largest growing economies today are powered by coal and have significant coal reserves. The increase in coal consumption across the globe has predominantly been due to demand for greater electricity generation in China, India and other non-OECD countries which have seen total power generation double since 2000.

World Bank estimates show that during the period 1980-2008 Chinese annual coal consumption increased by more than 400% from 626 million tonnes to 2.7 billion tonnes. Similarly, the Indian Government anticipates an additional 60GW of coal-fired power generation to be built in the country by 2017 which would increase total coal-fired capacity to approximately 175GW[2].

This means an improvement in technology will make coal-based power plants more efficient and environment-friendly leading to lower cost of production and cheaper coal prices in future.

Historically, coal markets have tended to be international in nature and prices are determined by the cost of supplying the marginal unit of coal. Given the possibility of increasing demand from emerging economies and improvement in technology making supply of cost cheaper, it can be expected that overall there will be rise in price of coal for the coming 5-10 year time horizon. As demand is set to rise at a faster pace due to emerging economy needs whereas technological improvements that can lead to cheaper coal production will take time to show its impact.

Utkarsh Akhouri is currently Head of Operations (Asia – Pacific) in Minpol GmbH and has led the product development team for MINRIS App. He has graduated from Indian Institute of Technology, Kharagpur with Bachelor’s Degree in Mining Engineering and Master’s Degree in Financial Engineering.